Sad news to report as an American Hero and a personal hero of mine and all of us in Rocketry, John Glenn has passed away at 95.

Space missions: STS-95 and Mercury-Atlas 6.  The First American in Orbit. 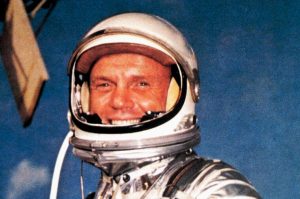 John Glenn Jr. was born on July 18, 1921 in Cambridge, Ohio. A Marine pilot, he was selected in 1959 for Project Mercury astronaut training. He became a backup pilot for Alan B. Shepard Jr. and Virgil “Gus” Grissom, who made the first two U.S. suborbital flights into space. Glenn was selected for the first orbital flight, and in 1962, aboard Friendship 7, he made three orbits around Earth. After his decorated service in the U.S. Marine Corps and NASA, Glenn went on to serve as U.S. Senator from his home state. He died on December 8, 2016 at the age of 95.

See you all this Saturday at Vista View Park